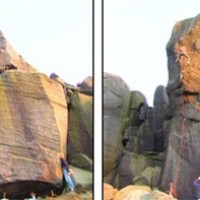 Kevin Jorgeson is best known here in the U.S. for blurring the line between highball bouldering and outright soloing.  His notable highball boulder ascents include The Duel (V10 FA) in Hueco Tanks, The Beautiful and Damned (V13 FA) and Flight Of The Bumblebee (V9 FA) in Bishop.  In addition to these bold boulders, ropeless ascents of both Feeding Frenzy (5.13d) and The Fly (V14) in Rumney only served to solidify his reputation as one of America’s boldest (and strongest) climbers.

Jorgeson is currently over in England, home to some of the world’s boldest traditional testpieces, with fellow Americans Matt Segal and Alex Honnold.  After spending a few days getting used to the gritstone climbing they have already set about making their mark.   Late this week, Jorgeson succeeded in climbing the famous headpointing testpiece Parthian Shot (E9 6c) at Burbage South.  Notable about his ascent was that he did not engage in the normal headpoint tactics of toprope rehearsal before attempting to lead the route.  Each of his attempts was done ground-up, albeit with pre-placed gear.  According to UKClimbing this is the first time anyone has succeeded on a route of this confirmed difficulty with this improved style.  Here is what Jorgeson had to say in his travel journal about the successful send:

On my forth attempt of the day, something clicked and I stuck the move that has been shutting me down for about 12 attempts: an accuracy and timing dependent dead-point to a pocket. After sticking the pocket, I nervously matched feet and with curiosity felt the sloping dish that I had looked at so many times before while peeking over the edge from the top. While I was not thrilled with what it offered, I forced myself to continue. I high-stepped with my left foot and began the precarious rock over onto the slab. With such a slow, balance dependent move, I had several occasions to consider the fall. It took ages to stand up on the slab. I was thrilled to be able to reach the arete from the decent foot hold, but several smears were still required before I was  safely on top. Luckily, everything stuck and I safely topped out! Psyched!

The route in question was made famous in the mid-90’s film Hard Grit.  Here is a clip from Hard Grit of Seb Grieve attempting the line that should give you a good idea of what it took to climb this route.