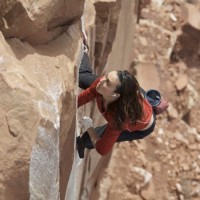 Thanks to Sarah for translating this interview originally done by the French climbing magazine Escalade.  They caught up with Steph Davis after her recent Free Solo of, and subsequent base jump from, the summit of Castleton Tower.  You can read more about it at Steph’s blog.

The American climber returns from her performance on Castleton Tower, Moab (solo ascent of the north face and descent by BASE jump)

You recently soloed Castleton tower and descended by BASE jumping. I think that it would not be wrong to say that you like commitment?!!

Absolutely. Commitment is the thing that inspires me most.

Some were surprised by the photos of the solo because you climbed without the parachute and you only put it on once you had reached the summit. Could you tell us more about that?

If I fell during the solo, I would not have been able to open the parachute, it wasn’t secure. So, I didn’t wear it climbing because it added pounds and the climbing becomes increasingly difficult and more dangerous. Also, Castleton Towers is a special jump due to the low height (125 m). It leaves little time for the deployment of the parachute. It must open at its best and the folding has to be impeccable. In this case, there was already a parachute at the summit because we wanted to jump the week before, but the wind conditions prevented us ad we descended via rappel.

Isn’t it dangerous to film and publicize this type of performance because it could be seen as encouraging others to do it?

In a way yes, what I reason to be dangerous about filming this type of ascent is the risk of being distracted by the cameraman. Up until now, I had always refused. However, in this case, it was Jim Hurst filming me at Castleton Tower. He’s a friend and I have known him more that15 years. He even witnessed my marriage to Dean (Potter). I think that he truly understands my state of mind and the way in which I climb. So thus it didn’t pose any problem for him to be there. We agreed in advance that there would be no communication between us during the ascent and that he would stay completely away from me so that he wouldn’t distract me. The solo was truly magical and I’m glad Jim made the film.

In 2005, you freed the Salathe and declared that you accomplished your dream. What is your dream now?

Right now, it is to go closer and closer to committing things like soloing, BASE jumping and wingsuit flying. I am also very excited about the idea of realizing hard routes on rock.

You live with someone (Dean Potter) who is also very involved in that type of extreme activity (solo, BASE jump, BASE lining…) What influence does the quest for committing activities have on your relationship?

It’s wonderful to live with someone who you understand completely, particularly for these types of powerful and instinctual experiences. As a general rule, big solos like this are born of deep questioning and of a powerful need to express physically this state of mind. These experiences require much introspection to understand what it signifies from a spiritual and emotional point of view. I consider myself very lucky to live with Dean because I feel connected to him by this thing that is so important to us as individuals.

You are known in France for these types of ascents and for your repetitions of free climbs of big walls in Yosemite. Are you also interested in other forms of climbing, such as bouldering or shorter routes?

I love it all. Right now, I am definitely most often inspired by lines of great height, usually for me cracks that cut through an integral part of a face or alpine routes. However, I love all forms of climbing.

What areas in the world would you like to discover, for climbing or other reasons?

I love the wild and isolated areas. All round me at home, in Moab, but also in other mountainous regions of the world. I miss the Karakoram and would love to return. But, I also love the desert here and if I never leave this area for the rest of my days, I would be okay with that.