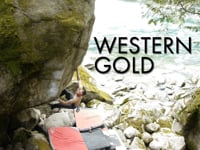 "This is a well-crafted film that resets the standard for entertainment and authenticity in bouldering films." - Gripped Magazine

"Western Gold offers a voyage of discovery that few other films can match." - http://www.mountainsandwater.com

"The film is beautifully shot, the image quality is some of the highest I have ever seen" - http://sonnietrotter.com

"The entire film has been meticulously crafted with an attention to detail unmatched in other bouldering films." - http://lloydclimbingblog.blogspot.com

Join Savage Films on an adventure in search of the best highball boulders on the West Coast of North America. Phenomenal cinematography takes you to five new world-class locales: Red Rocks NV, Leavenworth WA, Squamish BC, Cody WY, and Castle Rocks ID. Western Gold provides a thrilling view of the bouldering experience when climbers commit to harder moves higher and higher off the ground. From the hardest to the tallest the West Coast has to offer, get ready to see something new.