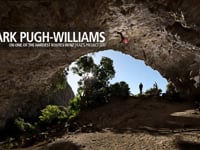 Climbing around Christchurch has been challenging since the series of large earthquakes that devastated the city. Access to crags has been difficult, and some of the most popular crags have become unclimbable.

Despite that, Christchurch climber Mark Pugh-Williams has recently become only the second Kiwi to climb grade 33 in New Zealand (including overseas ascents, just five Kiwis have climbed the grade.) Kaz's Project is one of the hardest sport-routes in NZ, with only two other routes at the same grade.

Marks shows no sign of stopping there - with every indication he's capable of more, Mark's progress in the future will be interesting to watch - first Kiwi to climb 9a?