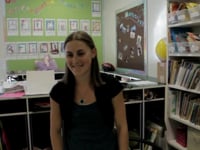 Jen Vennon had just accepted a scholarship to the University of Florida, where she aspired to become an engineer, when some friends took her climbing for the first time. With a childhood spent in gymnastics, Vennon took to climbing immediately.

“I quickly realized that engineering school in Florida wasn’t going to work out with my newfound climbing schedule,” she says. Vennon gave up her scholarship and transferred to the University of Tennessee to be closer to climbing, and get a degree in early childhood education.

In the last 10 years, Vennon has risen to become one of the top female sport climbers in the U.S. while holding down a full-time job as a Kindergarten teacher.

“I love Kindergarten,” Vennon says. “Those kids are the only people who think I’m funny.”

She is one of the few women to have ticked the elusive 5.14 grade in Rifle with her recent (second female) ascent of the 7 P.M. Show (5.14a), in addition to ticking off some difficult, sandbagged 5.13d’s there as well such as Living in Fear, Gropius, Simply Read and Slice of Life.

Before coming to Rifle in 2006, Vennon cut her teeth in the Red River Gorge, where the steep, enduro climbing informed much of her unique and intuitive style. High heel hooks and the ability to shake out on any hold forever are her fortes. Vennon, however, likes to say that her weakness in climbing is her “weakness,” and that “if there’s an easier way to do a move, you’ll be sure I will figure it out.” Climbing for her isn’t about competitive performance, but rather it’s a lifestyle and a way to be outdoors, testing her personal limits in the natural world.

For more on Jen visit www.prAna.com