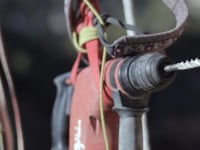 "When I was asked to make a video about Dani Andrada, at first I was super psyched and was looking forward to shooting it. Then, I realized that I had never filmed sport climbing, or even taken my camera on a rope (except to film a highball) and that I would not have time to try even once before going there. So I went to Catalunya not knowing what to except and quite nervous about screwing up while on the rope... Now that I am back, I only want to try shooting routes again!

If you are looking for a pure action video, this is not what this is. This is more of a 'video illustrated interview'. If you want to know more about Dani and his motivations, you are at the right place :-)

Dani has a strong reputation and all I can say is that he is as motivated as you would expect him to be. He is either climbing or bolting, or doing both in a day. He just never stops. And on top of that he is a genuine good person spending most of his non climbing time rebolting older routes to keep Siurana safe.

Weather was not kind with us, having fog, rain and very strong winds but it gave us some very intense tries in Siurana (sorry for the shakiness in La Rambla but I could not fight such wind...). And like Dani says, if you can do it in bad conditions, you will feel stronger when conditions get better..."

PS: the video was shot and edited in a very wide cinema aspect ratio. This is a test to see how well it could fit climbing. I couldn't stress enough that it looks best on a real TV so if you have a nice, big flat screen at home, download the movie (link on the right) and watch it there!