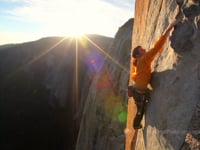 Legendary rock climber Alex Honnold scales Yosemite’s Half Dome, El Capitan and Mount Watkins without a rope, defying gravity to ascend the world’s most inspiring walls. Alex shares stories of his childhood visits to Yosemite, his travels to the best climbing on the planet, and his deep appreciation for America’s National Parks. (www.NationalParks.org/explore) The breathtaking beauty and epic size of Yosemite are featured, with spectacular video of its waterfalls, valleys, meadows, and ancient giant sequoias. The tranquility of the High Sierras and the quiet grace of Alex Honnold contrast the extreme danger of his free solo climbs. This video was shot before the Rim Fire and other 2013 fires at Yosemite.