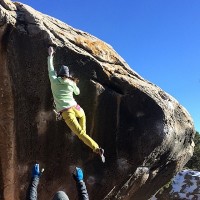 Ben Moon’s first ascent of Black Lung, which took place back in 2000, was chronicled in this short piece first posted on the original Momentum Video Magazine1. For many who were into climbing at the time this piece elevated Black Lung to an almost mythical status. A visiting legend in Ben Moon comes to the U.S. and does the first ascent of this amazing looking, hard problem2. I lost count of how many times I watched this movie when it was first released.

I’m curious about climbers who have only started climbing in recent years though. What movies or boulder problems or routes do you look at in the same way, if any? Let me know in the comments.

Leave a Reply to David Click here to cancel reply.