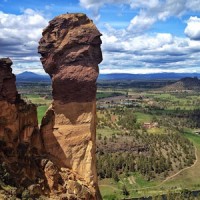 When I interviewed Paige Claassen back in April, she was about to leave for a sport climbing trip to Smith Rock, OR.  When asked about her plans there she was coy, but after this past Saturday we now know what she has been up to:  repeating the iconic route Just Do It (5.14c).

First done in 1992 by visiting French climber Jean-Baptiste Tribout, Just Do It has long been a sought after tick for the world’s top climbers, and now Paige is the first woman in the world to add her name to the list of climbers who has repeated this climb.  In an email exchange with Climbing.com, Claassen called Just Do It, “the hardest thing I’ve ever done”.

For a taste of this route, you can watch this video of Ryan Palo repeating Just Do It from a couple years ago.