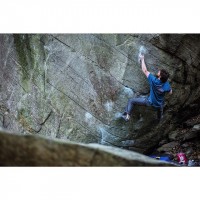 After a stellar trip last year, Jimmy Webb is back in Switzerland with similar results.

Already in the first couple of weeks he has flashed 9 problems in the V11-12 range according to his 8a scorecard including Ganymede Takeover and Delusions of Grandeur.

The list of problems that has taken him what must feel like an eternity more than one try to complete includes the 2nd ascent of Carlo Traversi’s The Kingdom, Dai Koyamada’s Insanity of Grandeur, Dave Graham’s Big Paw and Micky Page’s From Dirt Grows The Flowers Left.  All four of these problems had been considered V15 at one point, however Webb has bravely and humbly suggested V14 for all four.

2nd ascent of The Kingdom

One day ascent of Insanity of Grandeur

And today, he did Graham’s The Story Of Two Worlds (V15) in Cresciano