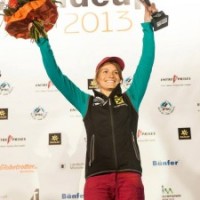 After a brief hiatus the 2013 Bouldering World Cup circuit held its final event in Munich, Germany over the weekend. Rei Sugimoto of Japan won for the men while…wait for it…Anna Stöhr won once again for the women. Alex Puccio, who had four podium finishes this season coming into Munich, had her best finish of the season with a 2nd. Here are the rest of the results from Munich:

Not sure what scores like 2t3 3b4 mean? Check out this post where I tried my best to explain the World Cup scoring system.

With his 4th place finish in Munich, Dmitrii Sharafutdinov cemented his place atop the season standings with Jakob Schubert and Sean McColl taking 2nd and 3rd respectively. For the women, Anna Stöhr’s victory in Munich was more of a victory lap as she had already wrapped up the overall title having won 6 of the 7 comps leading into Munich.

I don’t have enough perspective to say whether or not Stöhr’s season was the best ever, but it would be hard to top her results for 2013:

It wasn’t a complete cakewalk for Stöhr though as a review of each competition’s results shows that while she more often than not turned in an incredible performance and topped out all the problems, her competitors were not far behind. In Vail, Log-Dragomer , Kitzbühel and Millau she finished the same number of boulders as at least one of her competitors but won based on attempts or countbacks to a previous round. Her other victories in Munich, Toronto and Chongqing saw her edge her opponents by finishing one more problem. The one time she didn’t win, Innsbruck, both her and Juliane Wurm topped out four problems but this time it was Wurm gaining victory by using one fewer attempt to finish the four problems.

So, while Stöhr was able to turn in the most consistently great performance, it’s not exactly like winning 7 out of 8 comps was a foregone conclusion. If anything, her results and her ability to execute at the most pressure-filled moments are a testament to what a truly great competitor she is.