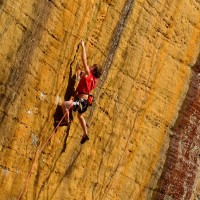 At the tender young age of 10 years and 7 months, Jonathan Hörst has ticked his first (and very likely not last) 5.14 with a repeat of God’s Own Stone (5.14a) in Kentucky’s Red River Gorge.  Leveraging beta from his brother Cameron who sent the route last year at age 11, Jonathan managed to repeat the route after a mere four tries spread across two days.

World records in climbing don’t really exist in this scenario because grades are such a subjective factor in our sport, but it seems likely that Jonathan is the youngest person to climb a route of this difficulty. For the sake of comparison you had Brooke Raboutou and Tito Traversa climbing their first routes graded 5.14a around 10 years and 11 months, and Adam Ondra didn’t do his first until he turned 11123.

While writing this I realized I’ve been climbing longer than Jonathan has been alive and I haven’t even sniffed 5.14a, but then again my dad had model airplanes and a ping pong table in our basement and not the dream home climbing gym that Jonathan’s father Eric has working in their basement.