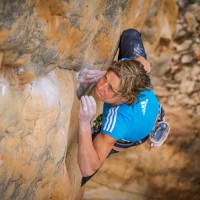 Mayan Smith-Gobat Repeats Punks In The Gym (5.14a)

Mayan Smith-Gobat has done the first female ascent of Wolfang Gullich’s legendary 5.14a Punks In The Gym at Australia’s Mt. Arapiles.  First done back in 1985, Punks was likely the hardest route in the world at the time, and it has remained a difficult challenge even if it is “only” 5.14a.

Smith-Gobat worked the route over the course of three years before clipping the chains:

Clipping the chains on this route felt amazing – It meant more to me than I ever thought it would. I had almost expected this moment to be an anti-climax, because I had spent so much time on this route. But it was the opposite – I was in disbelief, totally ecstatic and could not sleep at all that night because I was still so excited…  I just kept staring at the full moon repeating to myself “I just climbed Punks! – Its done…”

Check out her blog post about the send for more background on the process or working this route as well as a handful of great images from Rich Crowder.