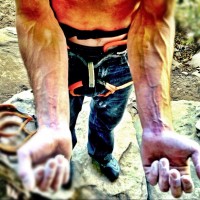 So It Begins In The Red River Gorge – Updated

This could be a season to remember down in Kentucky’s Red River Gorge. Some guy named Adam Ondra will be there shortly, and several big names are already on the ground racking up sends.

Daniel Woods is getting re-acclimated to the Red, sending Omaha Beach (5.14a) on his first try in 5 years (aftermath of the ascent above right) and making quick work of Southern Smoke (5.14c) and Thanatopsis (5.14a) according to his 8a scorecard.

The real news though comes from young Ashima Shiraishi, who has had quite the year with multiple V13s under her belt already. Shiraishi made quick 2nd try work of Joe Kinder’s favorite route, God’s Own Stone (5.14a), and yesterday she flashed Omaha Beach (5.14a), Bill Ramsey’s 130 ft. monster pitch out the Madness Cave. DPM caught up with Nick Duttle who has been showing her around:

On the ground before she started, I gave her a few tips about which holds to grab but it was pretty much an onsight.