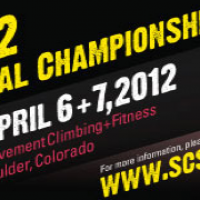 The 2012 edition of SCS Nationals went down over the weekend at Boulder, Colorado’s Movement Climbing+Fitness with two familiar names coming out on top.  For the women it was Sasha DiGiulian flashing the finals route en route to winning for the third straight year and Vasya Vorotnikov, who has been working his way back from a shoulder injury for some time, winning on the men’s side.

Rounding out the top three for the women were Delaney Miller and Michaela Kiersch.  Kiersch has been spending time in the Red River Gorge of late where she has had success in onsighting several hard 5.12’s/easy 5.13’s.

Rounding out the top three for the men were Dylan Barks and Daniel Woods.  Barks, just 17, is still relatively unknown nationally but he has climbed as hard as 5.14c in the Red River Gorge.  And Woods, well, I think you all probably know quite a bit about him already.

Look for the LT11 highlight reel to be posted here within the next few days, and I will continue to update this post as other reports/pictures/videos are posted.