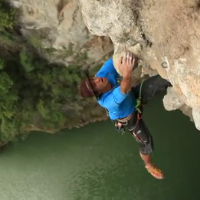 The 2012 edition of SCS Nationals kicks off today at Boulder, CO’s Movement Climbing+Fitness where 24 women and 37 men are set to compete for the honor of being named National Champion as well as a chance to qualify to compete in the IFSC World Cup coming to Atlanta’s Stone Summit in October.  Reigning women’s champ Sasha DiGulian will be on hand and the rest of the field is filled with a who’s who in American sport climbing and even bouldering.  It will be interesting to see how some of the competitors best known for their results at ABS Nationals do in a route comp1.

Somebody can correct me if I’m wrong, but I don’t think there is a live feed of the comp.  You can, however, expect to see a highlight reel from LT11.  Remember:  if you’re having a comp and there is no LT11 highlight reel, did your comp really happen?