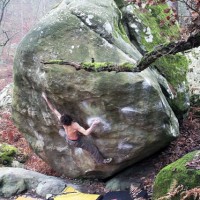 One would think that after Adam Ondra made his repeat of Gioia (V16) last week he would spend some time celebrating or basking in his success, or that he would at least mix in a rest day.  Ondra instead chose to drive straight to France for his first visit to Fontainebleau.  Once there, it should come as no surprise what happened next.

After a few warm-up days making quick work of problems up to V13 he got down to some serious business.  27Crags reports that he repeated Kheops Assis (V14) and then the next day managed a rather stunning flash of Gecko Assis (V14).  This would be impressive news to hear even from the most experienced Font climber, but to climb this successfully, this quickly on the technical and oftentimes conditions dependent problems of Font is something else.

In other Font news, Paul Robinson seems to have recovered from his perpetual sickness long enough to do the FA of a variation to the problem Gourmandise.  The new problem is called The Traphouse and weighs in at V14.

a notorious dilemma with the grade, fits perfectly my style, height and conditions were awesome. Buit the second climbing day, a bit tired and not fully on the limit. I would love to record it as 8B+, but it just did not feel like 8B+… that is my feeling

Update 2:  Via UKClimbing is this article (in French) from Kairn’s Pierre Délas who spent a day following Ondra around Font documenting the day in both words and several nice pictures.