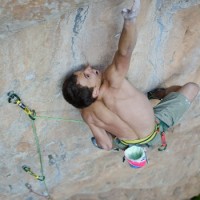 Siegrist’s next stop is Kentucky’s Red River Gorge, but before that he had some unfinished business to take care of in Rifle, CO.  After trying unsuccessfully to repeat Tommy Caldwell’s Tomfoolery (5.14b), he had turned his attention to an undone line bolted some time ago by the visiting Nico Favresse.

After some effort, Siegrist was able to free the “sea of underclings up a stunning 45 meter wall” calling the resulting route Shadowboxing.  He originally thought the route might be as hard as 5.14d, but after some consideration he decided to “settle” for 5.14c:

Colorado, and certainly Rifle, have a reputation for stiff grades that I feel I should uphold. Like I’ve mentioned previously, I think that the best thing we can do with grades is take them lightly, remain honest and strive to keep consistency within an area. To me, ‘Kryptonite’ remains the standard for 14d on the Western Slope and as much as I would have liked it to, Shadowboxing can not rival it’s difficulty. Even at 14c, the route is still beautiful, burly and waiting for suitors – I’m definitely still psyched, are you?!

As usual, you can read the full, very excellent report right at Siegrists’ blog.