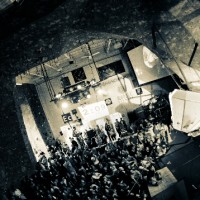 Last week I mentioned how the indoor comp season is starting to get underway, and below you’ll find a report from the recent Yank-N-Yard comp help in Albuquerque, NM that was kindly put together by the folks at Stone Age Climbing Gym.

When it comes to the climbing scene, New Mexico often plays second fiddle to Colorado, its more populous neighbor to the north. However when it comes to putting on an event with flare, style and attention to detail, New Mexico exceeds all expectations! Innovative free hanging volumes? Check. Professional lighting? Check. Sound System? Check. A DJ flown in from New York? Check. A rowdy, enthusiastic crowd cheering on the nail-biting finals round? Of course! The Yank-N-Yard proves that what starts as a grassroots event has the potential to blossom into something more, and it also proves that a professional climbing comp doesn’t hinge upon a climbing metropolis like Boulder or Salt Lake to attract a worthy field of competitors. Build it and they will come goes the adage phrase, and the competitive climbing world is no exception.

As for the star studded cast of boulderers? Naturally, most hailed from the big brother to the north. The exceptions being Jon Cardwell (OK, he might live in Boulder, but he’s Albuquerque born and bred) and Sierra Blair-Coyle of Scottsdale, Arizona. In the men’s category Jon was joined by Carlo Traversi, Nic Sherman, Michael O’Rourke, Ian Dory, and Asher Shay-Nemirow. In the Women’s category the rest of the field was made up by Flannery Shay-Nemirow, the twins, Jesse and Tyler Youngwerth, Megan Mascerenas, and Sarah Fullerton. Youngsters Michael O’Rourke (age 17) and Megan Mascarenas (age 13) proved to be the surprise finalists and they topped the wealth of upcoming talent showcased by this event.

As mentioned before, the Yank-N-Yard’s roots are that of a local competition and Stone Age hasn’t forgotten. In staying true to the Yank-N-Yard’s roots, Stone Age still painstakingly sets a citizens’ redpoint format competition comprised of almost 100 class A problems. This year, 130 dedicated locals took part in this jam session prequel that kicks off the glitz and glamour finals round. Stone Age seems to have come up with a winning formula: If an event is in need of a lively crowd to cheer a pro final’s round, look no further than a 3.5 hour citizens jam session, and let the finals kick off the after party.

The finals were set by the eclectic route setting team comprised of locals Matt Moore and Claude Smith, and experienced outsiders, Kyle McCabe (Head setter for the NorEaster Pro Tour) and New Mexico ex-pat Cody Roth. The finals consisted of three boulders with five minutes on and five minutes off. None of the three were pushovers, and sends were hard to come by.

Boulder one for both men and women featured mega volumes and intricate technical movement. In the Women’s category Sierra Blair-Coyle, Megan Mascarenas, and Jesse Youngwerth pulled off the only tops.
buy dapoxetine online https://myhst.com/wp-content/themes/twentytwentythree/assets/fonts/inter/dapoxetine.html no prescription

Megan flashed the problem which put her firmly one step ahead of her peers. As for the men, five of the six came ever so close to sussing it out, but close only counts when you’re throwing horseshoes and hand grenades! The crowd was hungry for a send and former local Jon Cardwell kept his poise and didn’t let them down, sensationally flashing boulder one, thus putting the heat on his fellow competitors.

Boulder two featured the first of the two suspended volumes and once again saw tops in the women’s category coming from Megan Mascarenas and Tyler Youngwerth with Megan managing to dispose of this bloc on her first go. In the men’s category the air remained electric as the competitors made steady progress, but just couldn’t quite seal the deal.
buy lasix online https://myhst.com/wp-content/themes/twentytwentythree/assets/fonts/inter/lasix.html no prescription

That is until Carlo Traversi stepped up to the plate with a much needed send on his second try.

Boulder three, featured a free hanging volume dubbed “the coffin”, and it lived up to its name for both men and women. In the men’s category all bets were still on when it came to this boulder.
buy orlistat online https://myhst.com/wp-content/themes/twentytwentythree/assets/fonts/inter/orlistat.html no prescription

As for the women, Megan Mascarenas pretty much had both feet through the door to first place after flashing the first two problems. As fate would have it, boulder three turned out to be a beast of burden for both men and women. Megan’s run of flashes ended here, and as her five minutes counted down so did her run of tops.

In the end it all comes back to the essence of our sport; good friends, exciting movement, and a fun scene. Carlo Traversi captured the heart of the Yank-N-Yard when he said it best “The vibe here is hanging out with friends, climbing, and just having a good time.” Of course, the top finishers walked out the door with a $1,000 paycheck which is not too bad for a weekend of climbing.

Check out highlights from finals here