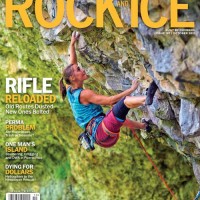 Earlier this summer kindergarten teacher and Rifle, CO local Jen Vennon blogged about how she had repeated Huge (5.13d) in Rifle’s Bauhaus and that she was already at work on another project.  She didn’t specify the name of the route she was working on, but it seems safe to assume that it was the nearby route Stockboy’s Revenge (5.14b) which she managed to send this past Saturday in less than ideal conditions.

Vennon is no stranger to success in Rifle having sent a handful of 5.13d’s like Simply Read, Living In Fear and the aforementioned Huge, in addition to her repeat of 7 P.M. Show (5.14a) last fall.

Stockyboy’s Revenge was first opened at a suggested grade of 5.14c in August of 2005 by Andy Raether after a summer spent stocking shelves at a local Rifle grocery store, and subsequent repeats have led the grade to settle somewhere in the 5.14b range.  Not surprisingly, the 90 ft. line has the typical mix of jessery and power that is common on routes in Rifle.  In an interview with Rock & Ice Vennon describes how the route climbed for her:

Stockboy’s climbs like a climb you’d only find in Rifle. In the crux I used an upside-down knee-bar to reach a hold and then turned the knee-bar around (literally placing my foot where my knee was and my knee where my foot was) to reach the next hold. I could do that consistently, but I quickly learned that I had to do it correctly or I’d never be able to get a move higher. Doing it correctly was VERY hard and specific. I only managed it twice.

You can check out the rest of the interview by clicking here.

Update:  Some footage of Jon Cardwell on Stockboy’s for reference

Update #2:  More from Vennon on the ascent

I have to say that I’m very psyched to have sent this route.It’s uniquely amazing and exemplifies everything I love about Rifle. Strange,cryptic, specific, and above all fun.
Big thanks to Andy Raether for bolting this route and all ofmy patient friends who had to deal with my various and often-unpredictable emotionsthroughout the process.