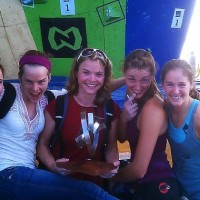 The comp is in the books!  Here is who came out on top:

Check out the Finals live blog to read how some of the action unfolded.  More to come!

Update:  So, now that I’ve had some time to process things lets take a little closer look at how finals unfolded.

First, the fact that rain cancelled semi-finals changed the entire comp.  After a series of deliberations between the routesetting crew and event organizers it was decided to basically cancel finals, which would have been the top 6 climbers after semi-finals climbing a set of 3 problems, and run semi-finals later in the day as “finals” to decide the winners.  This meant 20 climbers moving through 3 problems, the same problems they would have climbed had semi-finals actually happened.  This raised a some questions with the most important being could these problems do the job of separating all the competitors who had topped out all the qualifier problems on Friday.

For the women, I think most people thought it would come down to Angie Payne, Lizzy Asher and Alex Johnson and that’s exactly what happened.  Of the three, Payne came out first after qualifying in 5th position.  She stormed her way up all three problems on her first try in impressive fashion setting the bar high for the remaining competitors.  As soon as Asher and Johnson fell on problems 3 and 2 respectively (at the same time even) the comp was clearly won by Payne marking her 2nd straight UBC Pro Tour win.

For the men things were decidedly less clear.  After seeing the strength of the men on Friday it seemed conceivable that several of them could flash all 3 problems, but that turned out not to be the case.  Problem 1 turned out to be the easiest with 5 guys topping it out, but here is where Vasya Vorotnikov let the comp slip away for him when he fell trying to stick the finish hold multiple times.

Men’s Problem 2, which climbed out the horizontal roof on the far left side of the comp venue, would turn out to be the toughest problem of the day.  Early competitors struggled to figure out a good sequence on the bottom section and even those climbers who managed to make it past the lip struggled to figure out the crimpy moves on the top section.  Only Ian Dory was able to top this problem out, lunging to the finish hold and skipping the intended sequence.

Men’s Problem 3 looked to be a more straightforward power climb up a series of two finger pockets leading to crimps and a pinch high on the wall.  Here again though several of the competitors struggled to figure out the middle sequence which required the climbers to reach under to a two finger pocket then do a 1 arm, twisting 180 out to some crimps with the right hand.  Those that figured it out were rewarded as D’Anastasio, Landman and Vorotnikov all topped out the problem.

After seeing all the men falling in different places it turned into a guessing game trying to figure out what the final standings were going to be.  In the end it was Dory followed by D’Anastasio followed by Landman, but really any of a number of minor differences in where people got on a problem could have changed who won:

So, the routesetters did a pretty good job separating everyone since there were no ties, but how cool would it have been to see these top 6 guys come back and climb another set of 3 problems?  I know I would have enjoyed seeing that.

Speaking of seeing things, here are two different highlight reels from the event.  The first is the official highlight reel put together by the guys at LT11.  It has the high quality footage from the live feed which is good because it’s high quality but not as good since the live feed cameras only caught small glimpses of some of the climbers1  The LT11 clip also features an amazing photo from the exact moment Payne stuck the finish hold on W3 which was a really cool moment.  The other highlight reel is of a lower quality but shows more complete attempts.