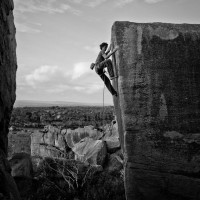 Final Words From Adam Ondra On His Rocklands Trip

Adam Ondra is back writing for the Black Diamond journal about the 2nd half of his most recent trip to Rocklands, South Africa.  In case we were starting to think that there were no climbs in the world that could stymie Ondra, he provides two examples.  The first is Nalle Hukkataival’s unrepeated V15 Livin’ Large:

First couple of tries [that day] were not successful, the worse was I split my fingertip. I kept trying though with the tape and 5th go I managed to make it through the crux move. From there, it is not extremely difficult, could be 7C+, but finicky, insecure and bold…Getting closer to the top, 3 moves below the lip, there is high step and I slipped at the very moment of bringing my foot up. I was falling backwards, far off the wall and hit the ground hard on the single thin pad. OUCH.

And the other problem was the unrepeated Fred Nicole testpiece named Oliphant’s Dawn:

It consists of three moves on incredibly small crimps on a 30-degree overhang and after one hour of sessioning I walked away having done none of the moves. And I heard that bunch of people walked away with same result. All my esteem to you, Fred!

Check out the full write-up for more on those problems as well as the numerous other hard lines he did complete.

← Nick Duttle Repeats Alpine 5.14
The Other Side Of Life As Alex Honnold →