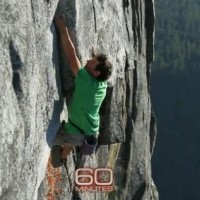 Alex Honnold To Appear On “60 Minutes” This Sunday

Set your DVRs for the 60 Minutes program on CBS this Sunday evening to catch their story about Alex Honnold.  Honnold, who was in the news just this week, is featured in the 60 Minutes piece doing some more soloing in Yosemite.  The article promoting his appearance only mentions footage of him soloing a route on The Sentinel, but I’m pretty sure cameras were rolling during his solo of The Phoenix as well, so we’ll just have to tune in to see what actually makes the show.