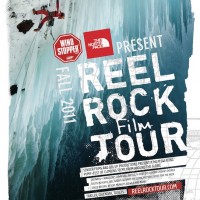 Tonight the 2011 Reel Rock Film Tour kicks off officially1 with two shows at Boulder, Colorado’s Boulder Theater.  2011 marks the 6th year for the tour, so I thought it would be interesting quickly review the prior five years before looking at this year’s show.  Here are the years and the movies that were shown as part of the tour:

This year’s tour follows the format of last year’s with each two hour show being comprised of several shorts 2 and two winners from the film making contest.  The shorts cover a wide range of climbing—bouldering, comps, trad climbing, speed climbing, mountaineering, ice climbing—and herein lies the key challenge that tour co-creators Big Up and Sender Films are trying to overcome.  With an endless stream of free videos littering the internet, each film in the Reel Rock Tour, in my opinion, sets itself apart by not only impressing the viewer with great visuals but also telling compelling stories at the same time.

A good example of this is the Origins:  Obe and Ashima short, which chronicles the relationship between 9-year-old prodigy Ashima Shiraishi and coach Obe Carrion.  While the visuals of Shiraishi winning ABS Youth Nationals and sending hard boulders in Hueco3 are interesting in their own right, the stories behind not only their coach-pupil relationship but Carrion’s career in the climbing industry was what really made that film memorable.

The only film I didn’t really understand was the Slacklife piece with Andy Lewis.  I guess I missed the part where slacklining went from something you did on a rest day at Miguel’s to a full-fledged sport, but even without that lack of appreciation on my part, it was difficult to enjoy watching someone repeatedly risk his life for little purpose other than that of perhaps risking his life.  The film tries to touch on the danger inherent in Lewis’ lifestyle, but it’s hard to balance repeated acts of recklessness4 with a few comments from friends expressing concern that Lewis may not be long for this world5.  The decision to make this film the closing segment of the show seemed just as odd as including it at all.   The film is clearly intended to evoke a wide-range of emotional responses from people6, but it seems like the Reel Rock show could have ended on a better note7.

That complaint notwithstanding, the Reel Rock Tour is certain to be a hit yet again.  There is a nice mix of physical and emotional elements throughout each of the films that combine to tell interesting stories which should be more than enough to entertain audiences.

If  the tour is hitting a town near you I’d strongly encourage you to check it out.  It’s usually a pretty good party and a great excuse to check out some climbing on a big screen with a psyched crowd.  If you can’t make it or there are no screenings near you, then there’s always the DVD/download to look forward to.