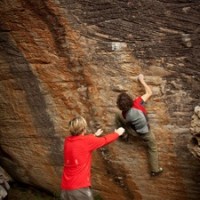 After winning overall Gold at the 2011 World Championships in Arco Adam Ondra commented that he was going to spend the rest of the year focusing on bouldering.  After a quick stop in Margalef, Spain where he made quick work of two 5.14d’s he’s made his way to Rocklands, South Africa, a place where he had great success flashing two V13s two years ago.

Last night I mentioned on the ClimbingNarc.com Facebook page that Ondra had already repeated the Fred Nicole crimp problem Amandla (V14) and that he was close to doing Nicole’s Monkey Wedding (V15) as well.  Even as I posted that it may have been out of date because yesterday Ondra repeated Monkey Wedding for its 3rd ascent after Nicole and Paul Robinson in 2010.

In other news out of Rocklands, Slovenian Rok Klancnik also repeated Amandla according to his 8a scorecard and American Dave Wetmore repeated The Vice (V13).

Photo of Adam Ondra attempting Amandla from two years ago from PlanetFear.com

Update:  Ondra has now updated his 8a scorecard where we can learn that he also flashed The Power Of One (V13) and sent Madiba (suggests V13) in 2 quick tries.