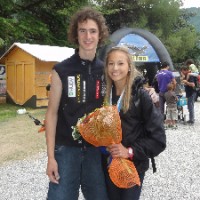 There were a lot of interesting things happening in the climbing world during my recent vacation, but perhaps none more interesting than the two week long IFSC Climbing World Championships that were held in Arco, Italy.  Most of the best competition climbers in the world descended on Arco to test their skills in sport, bouldering, speed and even paraclimbing events.  It would be impossible for me to do the event justice at this point, but fortunately the event’s website is a treasure trove of information, results and videos from the event.

From the American perspective, the most notable news coming out of Arco is the incredible showing of Sasha DiGiulian.  Continuing an amazing year that has already featured multiple 5.14c redpoints, DiGiulian took the overall gold medal at the World Championships based on the strength of a 2nd place finish behind Austria’s Anna Stohr in the bouldering event and a solid 8th place finish (actually a 7 way tie for 2nd) in the seemingly poorly set lead event.

For the men, a self-described “out of shape”* Adam Ondra won the overall gold medal after finishing 2nd in the bouldering event and 3rd in the lead event.  In addition, he won the unique Duel event and received his 3rd Salewa Rock Award given to the climber with the best performance on real rock as voted on by a panel of international climbing magazines.

For full results and reports from every event check out the World Championship’s website by clicking here.

*so out of shape that he onsighted yet another 5.14c on his way to Arco

Update:  Some interesting insight on the event from Udo Neuman

The Arco World Championships was a two faced affair, at least concerning the bouldering. On the bright side was solid route setting, stunning performances and the realization how high the standard is meanwhile, especially in countries that usually don’t compete in the world cups (for many reasons). On the dark side we an arrogant organization that was unable to cope with the many competitors and clearly not interested in bouldering at all.