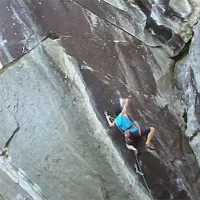 One doesn’t normally associate summer in the Northeast with conditions suitable for sending hard projects, but clearly no one has ever told that to 21 year-old Mike Foley.  Last summer in Rumney he repeated The China Glide (5.14d) and just yesterday he did the 3rd ascent of Vasya Vorotnikov’s Jaws II (5.15a).

According to his belayer Foley waited until later in the day for the route to go in the shade, but it was still somewhere in the 80 degree range when he sent the route.  Foley used similar beta to that which Daniel Woods used on the 2nd ascent, and he had this to say about the route on his 8a logbook:

Unsure about the grade. The way Vasya did it was for sure 9a+. My beta was very similar to Daniel’s. Regardless of the grade it still feels like the hardest thing I have ever done. Epic conditions battle. Sent in 80 degree weather. Redemption after a difficult summer.