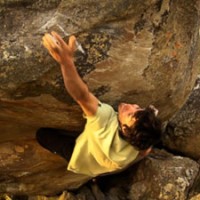 So far I’d say that July was a pretty good month for Paul Robinson.

On the one hand you have the release of his first climbing movie, The Schengen Files.  Available as a download for $6.99, the short movie chronicles his exploits in France and Switzerland from earlier in 2011 which saw him repeat numerous V14 and V15 boulder problems.  I haven’t had the opportunity to watch the movie yet, but so far the reviews seem generally positive.

On the climbing front, Robinson has been posted up in Cape Town, South Africa for the past month or so, and the results have been pretty impressive.  After a couple of intro weeks he got down to business and has completed the FA of some 8 boulders V12 or harder.

Highlights include the FA of Mirta, a potential V14 that he compared to a “harder and cooler nagual*” on his 8a logbook, and his FA of a potential V15 called A Simple Kowning.  The latter problem, which was first reported here, was completed just yesterday, and Robinson had this to say about the ascent on his 8a logbook:

well this has been a huge mile marker for me! this climb went from feeling near impossible to finally going! tooke me 4 days to stick just one of the single moves on the climb and 7 days to actually send! I found it very similar in style to big paw and slightly harder. tough intro section (7C+) of about 8 moves and then a crazy 3 move crux section! relieved to have this thing completed!! so much more left!

Robinson has “caught the exploration bug” so it will be interesting to see where the next year takes him.  In various updates on his blog he mentions plans to climb in New Zealand, Japan and other countries in Africa so it should be fun to follow along.

And while we’re on the subject of the bouldering in South Africa, an excellent local blog to keep tabs on is the Cutloose Bouldering blog.  They have a lot of updates from Paul’s trip as well as other local news like the fact that Arjan de Kock repeated Fred Nicole’s Rocklands crimp testpiece Amandla (V14).

Update:  You can add another V14 FA to the list as well.  Thanks for the shout-out Nic…