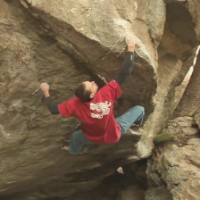 While perhaps not a widely know name here in the U.S., Italy’s Christian Core has been leaving his mark on the sport for years winning multiple World Cups and repeating and establishing some of the world’s hardest boulder problems.  In 2008, he made news by establishing Gioia at his local crag near Varazze, Italy.  The problem, which is somewhere in the V15/16 range, has drawn attention and praise (but no repeats yet) from the likes of Adam Ondra and Daniel Woods.

In this excellent profile video that can be downloaded for free from iCLIMB.com, Core talks at length about what the sport of climbing means for him and his wife Stella.  He also runs a lap on Gioia, and there are brief clips of several other well-known boulders interspersed throughout the piece if you are paying close attention.

Still shot of Christian Core on Gioia from the iCLIMB short