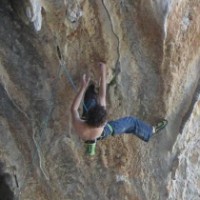 Much digital ink has been spilt over the past several years regarding the route Chilam Balam which is a 270 foot super route at southern Spain’s Villanueva del Rosario.  The route’s first ascent was claimed back in 2003 by Bernabé Fernández who, after 3 years of work on the route, proposed the unheard of grade of 5.15c.  The suggested grade combined with Fernández’s seeming lack of forthrightness regarding basic proof of his ascent (i.e. the name of his belayer) has left the ascent as a topic for debate ever since.

The mystique over the route only grew as it rebuffed efforts by the likes of Dani Andrada and Chris Sharma which begged the question:  would anyone ever put in the time necessary to repeat this route?  If so, how long would it take them and what would they say about the all important grade.  Reports surfaced in the past couple of weeks that Sharma and the red hot Adam Ondra would soon be making a trip to give the route a serious effort, so it seemed like we could have an answer to these questions sooner rather than later.  How soon?  Pretty soon as it turns out.

UKClimbing is reporting that Ondra repeated the line after just 4, yes 4, tries.  Despite the quick work Ondra apparently felt the route was somewhere in the 5.15b range which would be hard to believe if he didn’t just get done onsighting a slew of 5.14cs last month.  I think it’s safe to say he’s feeling pretty fit right now.

Of course Ondra’s repeat doesn’t really do anything to confirm or deny the veracity of Fernández’s ascent although it does seem to confirm the route’s difficulty.  If Fernández did in fact do the route it was among the hardest in the world for some time until Sharma came along and did the FA of Jumbo Love some 5 years later… at the time

Update: 9b has a good write-up on the history of Chilam Balam