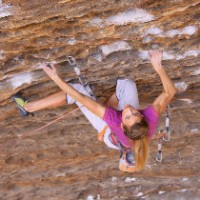 Today at Bob Marley in the Red River Gorge I bore witness to Sasha DiGiulian making an impressive send of Joe Kinder’s Southern Smoke (5.14c) for the route’s first female ascent. More details to come when I’m not typing on an iPhone…

Update: Well, we are back home now.  Being that this was one of the few times I was actually present for a newsworthy send you’d think I’d have a lot to add…but I really don’t.  It was sort of like “oh, there’s Sasha DiGiliuan and Magnus Midtbø climbing on Southern Smoke and Ultra Perm”.  Not wanting to be the stalker type I continued with my day of non-sending when all of a sudden Sasha was lowering to the ground and she had just done Southern Smoke.  No theatrics.  No protracted battle to send.  She just got to the crag, warmed up on a .13d and sent the route.  Pretty amazing really.  She even commented afterwards how she didn’t even get pumped!

Writing on his blog, Magnus Midtbø comments on how it was the “most impressive belay” he’s ever given and notes that Sasha sent the route on her 6th attempt making it look like 7a (5.11d).

For reference here’s a video of the route:

Update #2: DiGiulian went back and climbed on the route yesterday to capture these photos