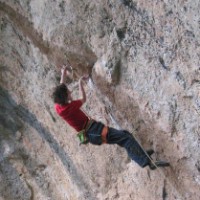 In a recent interview with PlanetMountain.com 18 year-old Adam Ondra commented that he spent most of December resting “to prevent injuries and also as possible way to get stronger”.  Upon his return to climbing he admittedly felt a little weak but soon found that he was “feeling really strong” once again.  Strong indeed.

In February Ondra did his hardest FA to date in Siurana, Spain with the FA of La Capella, and this week he took it to a new level in Etxauri, Spain according to this report in Spanish on Desnivel.com.  After “warming up” with onsights of F**k The Police (5.14b) and Tekken (5.14a), Ondra returned on consecutive days to onsight 5.
buy zovirax online https://gaetzpharmacy.com/dir/zovirax.html no prescription

In a report on UKClimbing Ondra said that the climbing at Etxauri fits his style of climbing, “but I definitely feel the pure power now, I can get out of mistakes that would have been surely fatal in the past.”

Update: Here is some footage of Ondra on one of the routes

6 Responses to 5.14 Onsight Spree By Adam Ondra In Spain