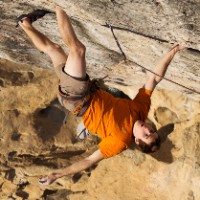 Having already climbed many of Yangshuo, China’s established 5.14s Ethan Pringle turned his attention to an open project left behind by Chris Sharma.  Given a working name of The Dumpling Of All Evil after a similar route in Arizona’s Virgin River Gorge, the project branches off Spicy Noodle (5.14c), a route which Pringle had previously done on this trip.  After being demoralized by his first attempt on the line, Pringle was able to make good progress on subsequent attempts and he freed the line on his 3rd day, calling it Spicy Dumpling and suggesting a grade of 5.14d.  As for how he could go from shutdown to sending in 3 days Pringle had this to say on his blog:

I think the reason I was able to do it so fast is that it has a really bouldery crux at about half height, then the upper cruxes are more technical and fingery and more on your feet with a decent rest in between. Once I was able to bust through the bottom crux, which came as a bit of a pleasant surprise, I only fell once on the last crux when a thumb catch broke. I’d say the climbing on the route is my style- lots of big moves between pinches and incut crimps, and I like the angle a lot.

You can check out some footage of Sharma trying the line here, but don’t take too much away from it since Pringle apparently does the climb much differently:

I do pretty much every crux sequence different than Sharma does in the Made in China video series,  mainly because he’s an absolute beast who doesn’t really need his feet very much and I’m a wimpy weakling who needs all the cheater beta I can find.

Photos of Pringle on the route by Lee Cujes can be seen here.

One Response to Hard 5.14 FA By Ethan Pringle In Yangshuo

Leave a Reply to dave Click here to cancel reply.