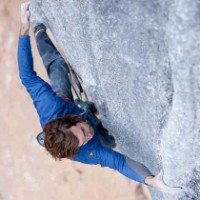 Chris Sharma Back In Action At Oliana

Things have been quiet on the Chris Sharma front of late, but the season is apparently on in Spain as Sharma did the FA of Power Inverter at Oliana over the weekend. According to this update on girlfriend Daila Ojeda’s blog he is proposing a grade of 5.15a for this new line.

To remind you just how amazing the climbing at Oliana looks, here’s some footage from Progression of Sharma on another of his 5.15 FAs there, Pachamma:

And some additional footage of him trying the Shaxi Raxi project at Oliana earlier this year:

19 Responses to Chris Sharma Back In Action At Oliana