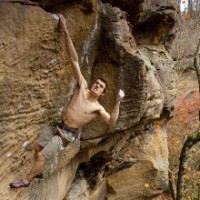 Productive Weekend At The Red River Gorge For Siegrist & Pringle

It was a busy weekend for hard sending at the Red River Gorge’s Chocolate Factory* with Jonathan Siegrist and Ethan Pringle both sending hard 5.14s.

On Saturday Siegrist dispatched the “Honeycomb” project on his third try of the day to yield Pure Imagination at a proposed grade of 5.14d.  Writing on his blog Siegrist describes the route like this:

After some easy initial climbing, the route fires directly into a very serious boulder problem on thin, very sharp edges, finishing with a wild, all-points-off sideways dyno to a resting jug. From here the route carries on with difficult lock-offs on crimps and pockets to surprisingly frequent, albeit worsening rests. Towards the top lies the a longest section of uninterrupted hard climbing that finishes with a reachy, shouldery lock-off (redpoint crux). There is a solid rest at the final bolt before you climb a series of pockets and long moves guarding the chains

To cap off the weekend Siegrist went and sent James Litz’ crimpy testpiece The Shocker (5.14b) in only 3 tries.  Check out Siegrist’s blog for a full recap of his weekend.

Just down the wall from Pure Imagination is the The Golden Ticket, a hard 5.14 which hadn’t seen a repeat since its FA by Adam Taylor last fall…until Ethan Pringle managed the first repeat this past Friday.  After suffering a nasty shoulder injury at ABS Nationals in February of 2009 Pringle is having a great 2010, so I thought I’d catch up with him to hear more about his send of The Golden Ticket and see what else he has planned:

I’m pretty sure this is your first trip to the Red, how do you like the climbing and the rural Kentucky scene in general?

I actually spent three weeks here back in the fall of ’05 (I think I was taking a sabbatical from 8a at the time ;-)) [Ed. note: how dare you?]. It was so fun and I’ve been meaning to come back ever since. I love the rock here. Last time I came I was mostly trying to onsight as many routes and sample as many crags as possible and had a great trip, but I didn’t really try anything more than a few times, so I was psyched to jump on something harder this time.

Tell me about Golden Ticket, what the moves are like, how the cruxes went that sort of thing

The GT is amazing! I’d say the majority of the holds are pockets and crimps, with a few better holds interspersed, so not very much my style at all, but the line is so inspiring and the movement is really incredible. The route starts out with some easier climbing for about 25-30 feet, with a short little 12+ crux to gain this slot-jug at the fourth bolt, then the business starts. Getting from that jug to the decent holds at the fifth bolt jumps the difficulty from about 12+ to about 13+. This crux was definitely the hardest section on the route for me to figure out and I had to stick clip past it my first two times up the route! It’s a V9ish boulder problem with this accuracy dead-point to this sort of hidden pocket, but once I figured it out I could climb through it from the bottom every time.

The next section of the climb takes you up to the scoop feature of the wall through some more delicate crimp moves and up to this hole that you can match and get a quick shake from. This section of the wall is probably about V8 and is the “slabbyiest” on the route, but is still about five degrees overhung. From that big hole you clip the 7th draw, hike your feet up to your waist, and make a big reach to this crazy feature with your left hand- from the ground it looks like the only hold in about 8 feet of climbing, which it actually is. There’s a slopey dish in the bottom of it, then you bump into this slot jug that’s only good enough for one hand, hike your feet up and clip, then cross to a incut crimp on the left side of the feature and embark on the red-point crux sequence. You do a big shoulder move out left to this crappy little split-finger crimp in the crack (that looks like it might be a jug from the ground but just isn’t), hike your foot up next to your right hand, and fall into the top of the hold with your right hand, then you make a big bump move out left onto the face. This is where I was melting off once I started getting close to the route, on these moves.

The red-point crux it probably like V9 or 10. I kind of made it a half a move or a whole move closer every time before yesterday, when finally I had the route so dialed and the muscle memory so down (plus I had perfect temps and a good warm up) that I just sprinted through the crux to the top like I had just hung on the previous bolt. It felt easy when I sent, and I was just kind of waiting to get pumped and fall, but I actually felt better on the top, that time coming from the ground then when I’d start from the RP crux after falling on previous attempts.

I’d just like to say that the GT is maybe the second best route of its grade, maybe behind Biography. There isn’t one manufactured hold on the route, the line is beautiful and in a beautiful setting on an otherwise blank wall, the movement is incredible and the holds are probably never going to break! I hope it sees the attention it deserves from other climbers in the future.

Pringle psyched to be sending Jonathan Siegrist has a project just down the wall from Golden Ticket, were you both ever working on your routes at the same time? If so, was there any sort of interesting dynamic at the crag with you both trying such difficult routes?

It was cool to have a project next to Johnathan’s and sort of be climbing next to him on opposite sides of the wall.  He’s a real inspiration to watch and fun to hang out with, but it wasn’t like we were both giving serious red point burns at the same time. It was sort of funny because when I first showed up to work on Golden Ticket, I wasn’t getting anywhere on it, and he was already making pretty good links on the Honeycomb, then he took off to Boulder and I made fast progress on the Ticket.  By the time he came back I was giving the ticket serious red-point burns and he was trying to link big sections and rehearse sections on the Honeycomb.  I did get to watch Johnathan send the Honeycomb today which was totally bad-ass. He just machined his way up the thing and showed very little signs of a struggle. Adam Taylor also came very close to the Honeycomb today as well, and will surely send soon. It’s cool that there are those two routes on opposite sides of the wall. I think the difficulty of the routes is pretty similar, but the climbing on them is way different. I kinda hope nobody bolts anything in between, it would kinda ruin the aesthetics of the climbs, in my humble opinion. Plus, anything else on the wall would sort of just be an arbitrary line of bolts up the wall because the Honeycomb and the Ticket are sort of the only obvious lines.

It sounds like you only have a short amount of time left in the Red, any other routes you are looking to take down before heading out of town?

I was psyched to give the Honeycomb some effort, and I got on it once today with hopes of starting to figure out some of the moves, but the boulder problem at the bottom is really sharp, a lot of the holds on the route seem pretty delicate and breakable and I don’t want my fat-ass to rip any holds off the wall. It also just doesn’t inspire me the way the Ticket did. I wanted to give Thanatopsis and Lucifer good flash burns, or try to dispatch them quick, but I’m ok with saving them for the next trip. I also really wanted to make it out to the New, but I want to have plenty of time when I go there, and I only have a few more days before I have to start the drive back to Cali and prepare for my up-coming trip to Yangshuo.

You suffered a pretty nasty shoulder injury back in early 2009 and so far the 2nd half of 2010 seems to be treating you really well. How is the shoulder doing and do you feel like you are pretty much back to your previous level?

I think my technique is always improving and could be better than is was before the injury, probably because as I get older I have to rely more on it, and I think my general level of fitness and endurance is as good or better than it ever has been. I haven’t really encountered a move that I couldn’t do or at least try because of my shoulder injury, so I think I’m doing pretty well.

What’s next after the Red?

China! I’m leaving for China on the 21st of this month and staying for an entire month. So psyched! I have a trip to Hueco planned for the end of January and I might head to Europe to train on some clip-ups for a month or so before coming back in the spring to work on the Jumbo Love route.

Now for the important question: what do you like on your pizza at Miguel’s?

I got a celebratory pizza from Miguel’s last night (large of course) that had onions, garlic, sweet potato, broccoli, chicken and black olives…I ate four slices. I don’t think it was the dream combo by any means, but the BBQ sauce instead of pizza sauce on half was clutch.

Thanks to Ethan for the interview and congrats to both he and Siegrist on their sends.

*For those that have not been, the Chocolate Factory is (another) great RRG crag with a nice selection of routes from 5.10 to 5.hard.  I spent a few days there last spring trying some of the “easier” routes and inevitably I would run over to the long, sweeping overhang that, while mostly blank looking, somehow held Pure Imagination and The Golden Ticket (and a massive hornet’s nest).  Once there I would just stand and stare in wonder that humans can climb such blank looking rock, so on a personal level its pretty inspiring to see that there are at least a few people that can climb these routes.  It’s also worth giving credit to Kenny Barker for having the vision to bolt both of these lines and open them up to the community.  Cool stuff!