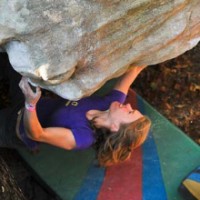 The second leg of the 2010 Triple Crown Bouldering Series went down Saturday at Alabama’s Horse Pens 40 with a pair of familiar names standing atop the podiums when the day was done.  For the men Jimmy Webb continued his dominance of the Triple Crown running his streak of victories on the circuit to 7.  For the women a non-local won for the 2nd straight year with Angie Payne making the trip out from Colorado to nab the victory.

Full results have yet to be posted on the Triple Crown website, but look for them in the near future.  Until then enjoy photos on DPM’s site as well as these photos on Climbing’s site from photographer Adam Johnson.

Update: Brad Weaver has an update on his day at HP40 letting us know that he managed 7 double digit problems in his 3rd place effort

Update #2: Here’s a quick video from Saturday put together by George Evans