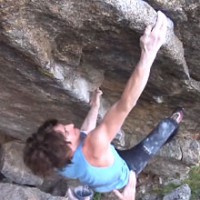 Videos are back this Friday, but first some news about longer form movies.

First, if you’re wondering when/if you’ll be able to buy the movies from the 2010 Reel Rock Tour you’re in luck.  Big Up mentioned on their blog that these films will be released on DVD in late November with downloads following in December.  Apparently they will also be offering downloads of some of their older films which is something to look forward to.

Second, Chuck Fryberger is working on two new climbing projects set for release sometime in the next couple of years.  The Network will profile Kilian Fischhuber “as he reconnects with some of the amazing climbers he’s met on the world cup circuit, and finds out about their local areas and the style of climbing that motivates them to achieve new levels.”  The other project, dubbed The Scene, will be more like previous Fryberger releases Pure and Core as it “compares and contrasts climbers and climbing culture” in Moab, Boulder, Innsbruck and Spain.  Footage of Nalle Hukkataival climbing at Joe’s Valley and in RMNP is already in the can so be on the lookout for The Scene sometime next year.

With that news out of the way let’s get to the videos, both of which highlight some of the new boulder development that took place at Mt. Evans’ Lincoln Lake this past summer.  The first effort comes from the “Island” crew of Chad Greedy, Jon Cardwell and  Dave Graham.  While not the most…polished of movies, “Enter The Wolvo” does an excellent job showcasing the Tour de Force that was Dave Graham this summer.  Just when you think he couldn’t possibly climb another double-digit boulder problem…he climbs another double-digit boulder problem.  Enjoy:

In somewhat of a contrast is the first chapter in the “Lincoln Lake GIANTS!” series brought to you by the guys at Louder Than 11.  This series is focusing on first ascents of all grades at Lincoln Lake with a bit of a story thrown in for good measure.  A new episode will be released each Monday with the grand finale set for November 22nd so keep an eye out for those.

← 2 5.14bs By Danny Robertson In Rifle
New Speed Record On The Nose By Potter And Leary →