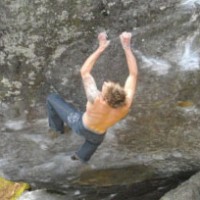 Americans aren’t the only ones getting things done on the boulders of Switzerland, Australia’s Chris Webb Parsons has been cleaning up several area classics and he recently established a potential V15 in Magic Wood.

Among the classics sent by Webb Parsons according to his 8a scorecard are Freak Brothers (V12) and Boogalagga (V13) in Chironico, and V13s Amber and Vecchio Leone in Brione.  Moving up to Magic Wood, Webb Parsons turned his eye to two projects.  The first followed a right hand exit to the V12/13 Steppenwolf which yielded a new problem he’s calling Believe In Two.  On his website, Webb Parsons proposes a grade of V15 for the problem and has this to say:

The next day the conditions were the best I have ever felt in the forest, and I managed to climb my physically hardest boulder to date. I called the line Believe in Two, and graded it 8C/V15. I’m sure the grade of this boulder will stand the test of time and I do believe it to be one of the hardest problems in the forest to date.

On the same day Webb Parsons did a direct finish to the V13 One Summer In Paradise which he’s calling Tough Times at a proposed grade of V14:

I was going to grade the line 8B, but after much discussion with my spotters, I was convinced the line should be graded 8B+/V14 due to it being a much much harder finish to One Summer in Paradise (8B). Maybe the best day of my climbing life?

What I find most impressive about Webb Parsons’ work is that it was only 18 months ago that he suffered a devastating shoulder injury while climbing in Hueco Tanks.  He ended up needing surgery to repair the problem and the fact that he is climbing at all is impressive, let alone at such a world-class level.  Maybe there is hope for me??

← The Season Begins For Tommy Caldwell & Kevin Jorgeson On El Cap
Sailing, Jamming And Climbing On The West Coast Of Greenland →