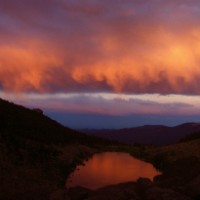 Anyone who has followed this website over the past 3 months probably noticed an influx of posts about a certain bouldering area near Mt. Evans, CO.  In case you somehow missed them here are just a few of the posts that mentioned what was going down at Lincoln Lake:

So yeah, it was a big summer by any measure for those who were able to get out there and actually climb at Lincoln Lake and for those who enjoy reading/blogging about such things.

Jamie Emerson, who was on hand throughout much of the season at Lincoln Lake, has an excellent writeup on his blog that covers how the summer progressed and lists most of the hard boulders that were put up and repeated.  Jamie also spends a great deal of time giving credit to Dave Graham who was the driving force behind much of the high end development:

Dave’s vision all summer was incredible. He continually sought out, cleaned and put up amazing problems. I don’t think anyone in the world puts in as much analytical thought to the whole process as Dave does. Even though Daniel (whose effort is certainly to be commended and is astonishing in its own right) did the FA of many of the hardest lines there, I think that every single one of them was found, cleaned, chalked and attempted first by Dave. Often times, like in the instance of Evil Backwards, The Great War for Civilisation, or Death Trout, Dave found the line, figured out the beta and brought Daniel there. Daniel’s raw power was on display and it is hard to deny the incredible ability he has, but I want it to be clear that, in terms of development, Dave lead the way.

For a more stream of consciousness-style summary of the season you can read Chad Greedy’s thoughts here.

In other Lincoln Lake news, on November 1, 2010 LouderThan11 will be releasing a free video called Lincoln Lake GIANTS that features a plethora of FAs.  In the meantime they are releasing promo videos like the one below of Ryan Silven repeating Jon Cardwell’s Tangerine Man (V8):