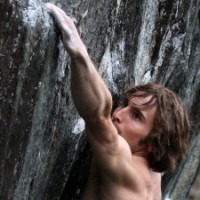 According to Maxim Zolotukhin’s twitter feed Daniel Woods pulled off the 2nd ascent of Jaws II (5.15a) in Rumney, NH today.  First done as Jaws (5.14b) by Dave Graham many years ago the route subsequently broke several times resulting in a much harder line that had only been done previously by Vasya Vorotnikov 3 years go.  Basically the route boils down to a short V12 and a 1 move V10 separated by some “easier” climbing.
buy grifulvin online https://noprescriptionrxbuyonline.com/dir/grifulvin.html no prescription

Writing on his 8a scorecard Woods says in reference to confirming a grade of 5.15a for the route that, “At first I thought 9a (5.14d) but after falling off the 2nd crux twice and having to fight in good conditions, I thought this could be harder.”