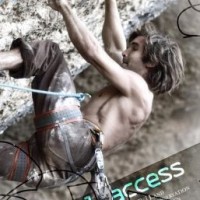 Contest: Win A Copy Of The Petzl All Access DVD

A bit of a celebration is in order.  Last week this little blogsite had its 2 millionth page view, and we also eclipsed the 1,000 fan mark on The Facebook.

None of this would be possible without you, the reader, so as a way to say thanks I’d like to do another giveaway.  The prize this time will be a few copies of Petzl’s All Access DVD which you can learn more about below.  The method of entry will be a bit different in the past so pay attention.  Here’s how it will work:

And that’s all there is to it.  I’ll promise at least 3 DVDs but the more people that enter the more likely I’ll be to throw in a few more.  I’ll leave entries open until some time near the end of next week.  Extra karmic points will surely follow those who hit the the “Suggest to Friends” button or the “Like” button and share the contest with friends, but I can’t guarantee anything.

If you’re not one of the 500,000,000+ people in the world on Facebook rest assured that this will not be your last chance to win free stuff from this website.

Head on over to the ClimbingNarc.com Facebook page to enter

The DVD is packed with about an hour of various segments which are listed below.  Highlights include Steve McClure’s repeat of Hubble, Chris Sharma getting “back in shape” in Spain culminating in the FA of a 5.14d, and the amusing Hey Presto featuring Sonnie Trotter.  Really all the segments are pretty good, and given the cause this is a great DVD that would make an excellent stocking stuffer for the upcoming holiday season.

Here are the clips in the movie followed by the trailer:

2 Responses to Contest: Win A Copy Of The Petzl All Access DVD