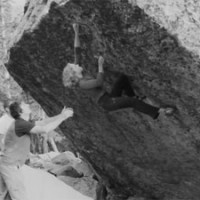 It’s always an uplifting day when you wake up and see The Facebook abuzz with excitement and congratulations after someone has accomplished a noteworthy ascent. Today was one of those days for Angie Payne as according to Kelly McBride & B3Bouldering she pulled off an ascent of the classic RMNP, CO testpiece The Automator (V13). A worthy ascent no matter who you are or what sex you happen to be, Payne’s ascent is notable nonetheless for the fact that this is likely the first time an American woman (or any woman for that matter) has climbed solid V13. Congratulations to her!

Apparently footage was taken of Payne’s climb for release at a later date, but until then enjoy this newly released uncut footage of her recent repeat of No More Greener Grasses (V12) at Mt. Evans.

Here’s some footage of Phil Schaal onThe Automator to remind you what this crimpy line looks like:

The Automator from Phillip Schaal on Vimeo.

Photo is of Angie Payne on NMGG

← Alex Honnold’s Half Dome/El Cap Solo Link-up In His Own Words
Contest: Win A Copy Of The Petzl All Access DVD →

14 Responses to Angie Payne Repeats The Automator (V13) In RMNP