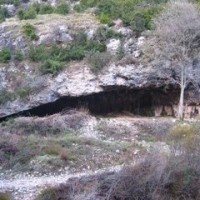 Magnus Midtbø reports on his website that he has done the likely second ascent of Ali Hulk Extension SDS (5.15b), a hyrbid boulder-route in Rodellar, Spain’s Ali Baba cave first done in 2007 by Dani Andrada.  The climb can be broken up into 2 5.14c-ish sections with the first being done as a boulder problem and the second part done using a rope clipped into a harness on the climber part way through the climb.  Says Midtbø:

Finally did it! More than three weeks of working the route in the ali baba cave. I am so relieved! I only had one and a half days left in Rodellar – perfect timing. I was so close yesterday, so I knew that I could do it today if I wasn’t too tired.

Here are a couple of videos to give you an idea what the climbing is like in the Ali Baba cave:

Update: Here’s a nice interview with Midtbø done by UKC