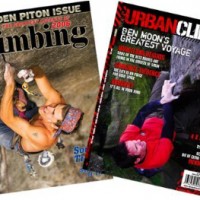 On the heels of an already active first half of the year, more changes are in the works at the magazines Climbing and Urban Climber.

Active Interest Media (AIM) has purchased Climbing Magazine, UCTV and Urban Climber Magazine from current owners Skram Media folding the 3 entities into the newly formed Outdoor Group that includes titles such as Backpacker.  Former Rock & Ice publisher and editor-in-chief Dougald MacDonald will be the editorial director for AIM’s climbing  magazines as well as editor-in-chief of Climbing.

The news was announced yesterday in a press release that outlines what kind of benefits and changes AIM is expecting from this acquisition:

Underscoring the opportunity that this acquisition represents to both the Skram climbing titles and to AIM’s existing Outdoor Group properties, Jonathan Dorn, general manager of the Outdoor Group, told SNEWS, “Backpacking is a gateway to climbing, and if you look at the various sports represented in the outdoors, it is hard to argue that there are not two more closely linked activities in terms of methods, locations, ethics, and audience than climbing and backpacking.

“By virtue of this acquisition, we have a growing footprint of publications and websites that work extremely well together to serve a very core group of outdoor enthusiasts,” said Dorn. “When it comes to mountain and trail sports, the Outdoor Group speaks to more influencers, more authentically, than anyone else.”

Added Ebersole, “As long as I have been at Backpacker, there have been very few days where we have not all thought how great it would be to have Climbing as part of the editorial family. To have Urban Climber now, too, which is reaching an audience in its early 20s, gives us a vehicle as a marketing, sales and editorial group to be able to reach that younger demographic, something the outdoor industry has collectively identified as vital to its future.”

Dorn, Ebersole and MacDonald told SNEWS some of what the climbing industry can expect to see from the acquisition in the near-term and long-term:

Research – AIM is using its research capabilities immediately by launching a project focused on brand awareness and digital content in the climbing market. The results of that survey will be shared with the industry at Outdoor Retailer Summer Market 2010.

Mobile and web – Backpacker has more than doubled its website traffic since 2007, and Dorn said he sees a benefit for both Climbing and Urban Climber websites by applying the same resources and principles AIM applied to Backpacker.

Events – AIM’s marketing department will use its experience in delivering value-added programs so its partners can reach desired audiences in many different ways. The Get Out More Tour and Adventures NYC, both Backpacker programs, create immediate opportunities for the Climbing and Urban Climber teams to get involved with events and the marketing department.

Trade Reporting – Climbing and Urban Climber will leverage the expertise and industry-leading coverage SNEWS represents to provide more coverage of what is going on in the climbing trade to retailers, reps and manufacturers.

“We are also looking forward to applying Backpacker’s gear-reviewing methodology—the apples-to-apples testing, the long-term field evaluation, and the geographic diversity—to the reviews in these magazines and websites,” Dorn said. “Our goal is to create best-in-class product evaluation, and that requires not only significant testing time but also a set of procedures that the industry and readership fully trusts.”

For MacDonald, he said he sees one of his primary goals to increase the amount of helpful information for climbers at all levels, from beginners to experts. “We will do that at a level of authority and thoroughness that has never been done before in a climbing magazine,” MacDonald told SNEWS. “In the editorial for Climbing and Urban Climber we will be aiming squarely at the hundreds of thousands of weekend warriors who are not being served. We will, of course, still cover elite climbers, but in terms of providing destination and helpful info our content will be aimed at inspiring and enabling the core.”

Could a redesign of the oft-maligned (by me at least) Climbing and UCMag websites be far off??

Update – More on the deal from Folio:

The acquisition is structured to allow AIM to manage Skram operations with an agreement to purchase the company in three years based on certain performance benchmarks.

Mark Crowther, co-owner and publisher of Skram, will continue as publisher of the titles and will report to Outdoor Group publisher Kent Ebersole.

AIM has been working on the deal for the last six months, says Jon Dorn, general manager of the Outdoor Group and editor-in-chief of Backpacker. Dorn declined to offer specifics on the eventual sale price or revenues.

← Popular Posts & Videos For May 2010
Jimmy Webb Continues His Climb →