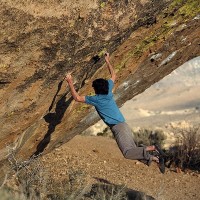 In addition to the excellent write-up on the Big Up Blog, Paul Robinson himself has written about his recent FA of Lucid Dreaming in Bishop.  In the post Paul discusses in detail how he evaluated the difficulty of Lucid Dreaming before deciding to propose a grade of V16:

After working “lucid dreaming” and eventually sending the line, it was very hard for me to come up with an idea of its difficulty. The climb is very different from “the game” and requires much different strengths to complete. I thought about terremer and jade. Both of which have a single move that mark the crux. “lucid” has a 2 move crux sequence which i believe to be even more difficult than if you were to combine the jade crux move with the terremer crux move.

Obviously grading boulder problem FAs is difficult at just about any level, so it’s especially interesting to read the thought process Paul went through when evaluating a problem of such extreme difficulty.

Check out this post on the Matador Network for a nifty comparison of Lucid Dreaming and  Daniel Woods’ The Game, the only 2 proposed V16 boulders in the U.S.