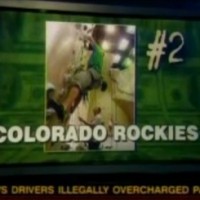 While this blog is far from the place for political discussion, I think it can be interesting any time climbing finds its way into political discourse.  Take, for instance, the example of Boulder’s Movement Climbing & Fitness Center which opened its doors last July.  In building the gym, Movement took advantage of $157,800 in stimulus money to help offset a portion of the cost for a solar array which helps power the facility.

The effectiveness of the government’s stimulus efforts have been a hot topic in recent months, and in a recent edition of his Fox News TV show Great American™ conservative commentator Sean Hannity listed Movement’s solar array as the #2 biggest waste of stimulus dollars (I fast forwarded for you to the pertinent segment of the video.  Feel free to rewind to the beginning of you must):

In response, Anne Worley Moelter, who co-owns Movement, had this to say to Boulder’s Daily Camera:

“We read it and were like, ‘You’ve got to be kidding me.’ It’s very hard for us to understand why they think that it’s a waste,” she said. “We’re putting energy back into the grid. We’ve provided Boulder with 50 new jobs. … I think it’s just a political scheme of, “How can we point out what this administration is doing wrong.'”

Like I said, this blog is not really the place for political discourse so I encourage you to read the rest of the story and the 100+ politically charged comments that go along with it at the Daily Camera’s website.  Or you could just watch Chruck Fryberger’s remix of the above video: