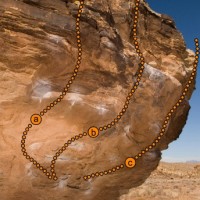 This place is wonderful and the lines are five stars of course! and now also Oliana has a new line of 50 meters bolted by Chris the last week… the name is Chaxiraxi and it can be one of the hardest route in the sector… 9b?? We will see that the machine says.. If it’s like this Chris has bolted four 9b routes in Catalunya Golpe de Estado 9b in Siurana, Neanderthal 9b inSanta Linya, First round First minute 9b project in Margalef and Chaxiraxi 9b project in Oliana. And with this line Chris has bolted in Oliana 10 routes. Looks like Chris doesn’t want just to send the hard routes, he want to create it too.

Leave a Reply to Andy Click here to cancel reply.