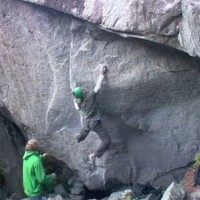 Nalle Hukkataival has had a superb 2009 in which (among other things) he has done the FA of V15 in South Africa, repeated Jade (V15), added a beautiful new V13 to Mt. Evans and added a couple of V13s in Hueco Tanks.  Not slowing down, he recently completed a new V14, Ninja Skills, in Switzerland.

Located near the small village of Sobrio, Hukkataival first tried the so-called Ninja Skills project a couple of weeks back, but it took a return trip and a few days of work before he able to send.

Hukkataival and his friends made a video of his Ninja Skills send that includes footage of other problems around Ticino as well as a few problems in Maltatal, Austria:

Could Be Worse from Boulderkeskus on Vimeo.