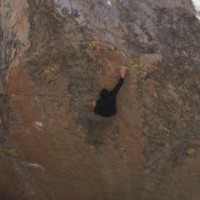 Getting a jump on the winter bouldering season in Bishop, CA, Dan Beall has done the 3rd ascent, and perhaps more notably the first ground up ascent, of the highball Luminance (V11ish) at the Secrets of the Beehive Area.

First climbed late last year by Shawn Diamond after toprope inspection, Luminance climbs “an exceptionally beautiful wall above a heinous landing”.  You may remember seeing this problem in the Reel Rock Tour’s presentation of Progression where Kevin Jorgeson does the 2nd ascent with spotter Tim Kemple anchored to the rock in order to aid him in spotting Jorgeson safely.

Intrigued after watching a friend feel out the opening moves on the line, Beall stepped up and gave the problem a shot:

After several forays across the scary lower moves, he soon found himself looking at the meat of the climb–a huge pull from one good edge to another with the terrifying drop zone into a ravine enough to make him second guess the outcome. However, after sitting down for a while, “until I stopped shaking,” he says, Dan pulled on once more and this time committed to the throw.

“Even though you feel like you’re going to die, I think that the climb is actually fairly safe with just a few pads because of how positive the holds are and how relatively controlled the falls should be. The only place where you could get really hurt I think is the move to the lip, but if you can get there, you really shouldn’t fall, it’s probably the easiest move on the climb.”

Read the rest of the story at the Bishop Bouldering Blog and then check out the video of the send: