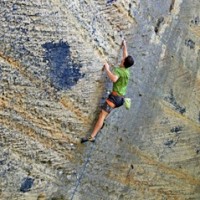 Somewhat below the radar at the time I posted about Jonathan Siegrist’s recent exploits at the Red River Gorge in Kentucky was the recent success of Adam Taylor.  Taylor, a somewhat controversial figure at the Red last year, completed the so-called Golden Ticket project (bolted by Kenny Barker and attempted by the likes of Chris Sharma in The Players) at the Red’s Chocolate Factory crag to create what is likely the hardest route at the Red.

Taylor is apparently not big on the whole online climbing thing, but he joined the forums at RedRiverClimbing.com long enough to share his thoughts on the route:

As for the route itself… it starts out nice and slow with maybe a 12c to the 4th bolt, wherein lies a massive jug slot, just enough to get one warmed up. The eight move sequence leading to the next bolt consists of thin moves and ends with a long desperate stab to a two finger pocket (the most frustrating move of the route). As a boulder problem it may be around V9. Three long moves will get you to the next bolt where you can obtain your final real rest in a 1 pad left hand slot and 1.5 pad right hand slot. Moving right leads to a long lunge to a perfect sloping hole which you match and make an even longer lunge/dyno to another 1.5 pad slot. The route to this move would probably be around 14a, but instead of clipping some anchors you abruptly and ruthlessly trend left into a 9 move V10ish boulder problem. With a hand foot match, precise finger placement, a heel hook, and a desperate stab you will end up on two small crimps where you can get a few shakes so long as your forearms aren’t pumped more than a tank full of gas. From here you still have 8 or 9 more hard moves before you can grasp the finishing jug, with the final move being the hardest (I found this out by falling past the last bolt six time last spring). The options for the last move are to full out dyno or use a bad sloping crimp to awkwardly cross.

As for the grade, I do not know… It is definitely a step up from both versions of 50, smoke, and lucifer, but not enough to make the next grade at the red in my opinion. I expect to see some quick ascents in the near future, maybe by those who will be more enlightened than I about its rating.

Check out Climbing.com for a few pictures and a video of Taylor working the route.

22 Responses to Adam Taylor Punches Golden Ticket At The Red